What’s feedback got to do with it? If it’s running a successful business or building strong relationships, effective feedback is everything. This is why Improvising Radical Candor, a co-production of Radical Candor and Second City Works, has created a laugh-and-learn workplace comedy series called The Feedback Loop to teach professionals a simple framework for successfully navigating feedback conversations.

It’s no secret that a majority of employees don’t receive the feedback they need to perform better at work, causing companies to lose time, talent and money. Learning how to have effective feedback conversations by applying the principles of Radical Candor — Care Personally and Challenge Directly — doesn’t have to be a bore or a chore. As The Economist writes, “Anyone who has spent a long time in an office job will have suffered the indignities of a training day.” 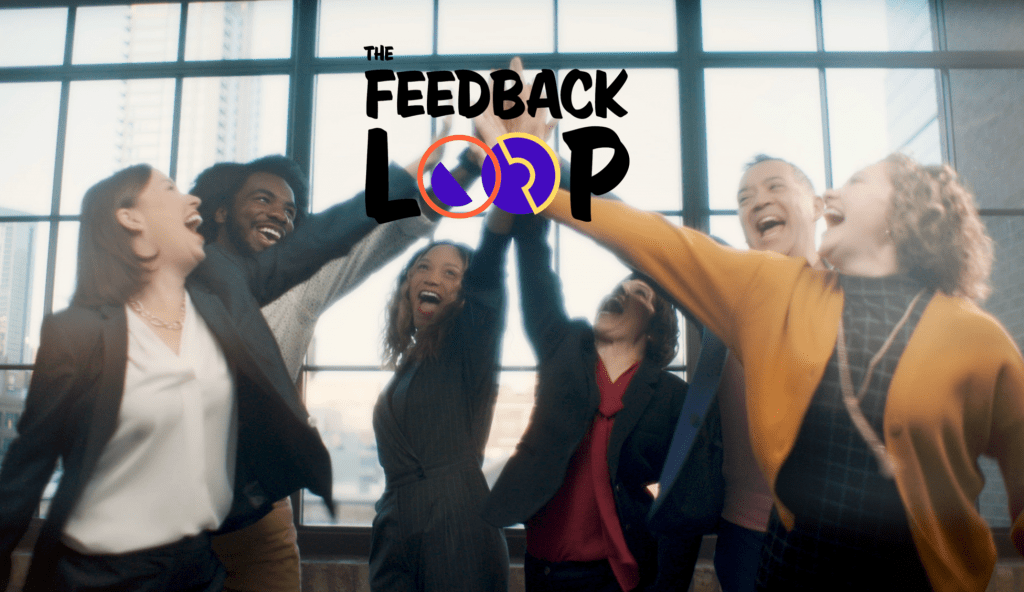 “The group-bonding exercise where workers fall into each other’s arms, as if they were part of a 1960s encounter group. The overenthusiastic guest lecturer who constructs a lengthy and banal presentation out of a series of random nouns. The debate about the company’s future which turns into an exercise in Stalinist self-criticism. It all resembles one of those nightmares when you find yourself marooned back in the school classroom. Thankfully, there are inventive ways to undergo training online. [And] comedy can be a source of solace in a crisis.”

Enter The Feedback Loop. This limited series follows two fearless leaders stuck in a cycle of communication chaos (think Groundhog Day meets The Office). After unsuccessfully trying to escape their office building, the pair realize the only way to stop repeating the same terrible day at work is to act less like Michael Scott and more like Kim Scott by applying the principles of Radical Candor.

“This is not your grandfather’s training program,” says Scott, co-founder of the executive education firm Radical Candor. “We partnered with Second City Works to bring Radical Candor to life in a way that’s relatable, engaging and hilarious.”

Improvising Radical Candor breaks convention from traditional e-learning offerings by combining Radical Candor with the comedic storytelling that’s synonymous with The Second City. As a result, The Feedback Loop is the only virtual workplace “training” that’s equal parts fresh, fun and effective.

“Practicing Radical Candor requires self-awareness and relational-awareness, and science suggests that improvisation can help make small yet significant behavioral changes,” says Kelly Leonard, executive director of insights and applied improvisation at Second City Works. “We are thrilled to use our unique comedic sensibilities to help bring Radical Candor to life with the playfulness and humor for which The Second City is so well known.”

Each episode focuses on a specific skill learners will need to practice Radical Candor — guidance and feedback that’s both kind and clear, specific and sincere.

Companies with underperforming teams, high turnover and stalled growth can benefit from Radical Candor’s simple framework for navigating feedback conversations. No matter where people are located, The Feedback Loop is easy to scale across an entire organization, creating a shared vocabulary and communication framework that promotes a culture of kind and clear feedback.

The Feedback Loop includes five 8-10 minute episodes along with supporting materials including after-episode cheat sheets, playful team exercises and an engagement toolkit of email templates and GIFs to help communicate, sustain and reinforce the lessons from the show. Learn more about Improvising Radical Candor and The Feedback Loop at improvisingradicalcandor.com.

Improvising Radical Candor, a partnership between Radical Candor, LLC and Second City Works, produces live and virtual content, including the new workplace comedy series The Feedback Loop, to help people practice Radical Candor through improv. Get it for yourself, or for your team.